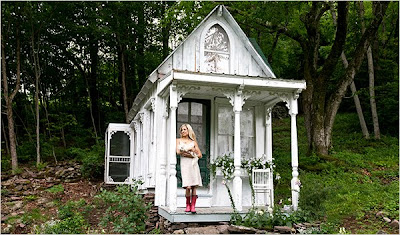 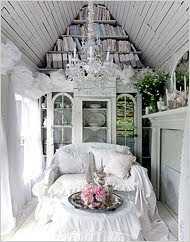 When I saw this I thought that this would be something that Thomas and I would Do!!  And We Would Love Doing It Together!

Make sure you follow the link(in blue..the tiny Victorian cottage) and go through the slide show of all the photos.  I just really adore this story, this tiny house and this lady! Joyce Wadler from the New York Times is responsible for this lovely story.

Please let me know what you think about this wonderful little piece of Yummy!   I needed to share...
K
Posted by Kay Gilbert at 3:34 PM

story is wonerful and place also. i found blog of this cottage, I'm so glad to watch and know more about it
Regards, Zojka

Promote Your Page Too

Kay Gilbert
Dothan, Alabama, United States
Hi! I am an interior designer and I offer my services from planning and design to IN Home Fluffing and Consultations. My hourly rate is $40. I have a booth at Old South Antique Mall on Reeves Street in Dothan, Al. I try to spend my TIME with my clients. But, I am always on the lookout for the perfect something just for you...or a special piece I can repurpose for its new life. I have Unique Furnishings, Antiques, Art Work and Decorative Accessories! If you are looking for something different.. just shoot me an email or call, chances are I HAVE IT !!!. You may contact me directly 334-790-6507, email @ designwithk@yahoo.com We have new arrivals weekly! Come See me Soon!! If you would like to receive my blog for notification of sales or new arrivals, please email me @ designwithk@yahoo.com.

Some of My Favorite Places to Visit